Posted on September 22, 2017 by John Friscia Leave a comment

It’s well established that I love Super Metroid and think it’s one of the finest games ever made. I never extended that same enthusiasm to Metroid Fusion or Metroid: Zero Mission. They’re both quality games, but to me, they just felt like “two games that wanted to be Super Metroid and weren’t.” By comparison, Metroid: Samus Returns never feels as if it had a goal of being another Super Metroid, and it works strongly to the game’s benefit. This is my favorite sidescrolling Metroid since Super, and a worthwhile remake of Metroid II on the Game Boy.

The Planet of Horrors 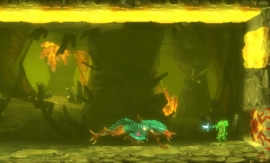 This scrappy fellow killed me a few times. In the heat of battle, sometimes obvious solutions eluded me.

Metroid is at its best when it lets the action do the storytelling. Someone at developer Mercury Steam must have known this, because Samus Returns features even fewer plot beats than Super Metroid did. The story here is completely straightforward: Bounty hunter Samus Aran is on a genocide mission to eradicate all Metroids from the planet SR388.

The brutality behind this otherwise simple premise permeates the whole game. In addition to the myriad boss fights with different types of Metroids–which can be challenging the first couple times you run into them–everything else in the game behaves viciously toward you too. There are no docile, incidental enemies in this game the way there were in past Metroid games. Everything on SR388 attacks fast, hard, and purposefully.

Fortunately, Samus receives some control changes that make her a more formidable character. For starters, she can now aim shots at any angle, which works much better than I was expecting. She also has a physical melee counterattack that can stop enemy (including boss) attacks and leave them in a vulnerable state. I used the melee attack frequently in the opening hours of the game and then less so later on, as I became powerful enough to get by without it. It’s a surprisingly excellent addition to the series regardless, since Samus does not feel as “trapped” anymore when cornered by an enemy.

She also has new Aeion abilities, which Destructoid’s Chris Carter accurately describes as the Metroid equivalent of a magic system. You receive four powers that draw from essentially an MP gauge, and they can reveal hidden areas, provide protection, increase attack power, or slow down time respectively. In total (and without spoiling anything), the several new additions to Samus’s play style enable novel new ways of solving old problems.

Her extended capabilities shine best in boss fights, which for the most part are extremely well crafted. Bosses enjoy a multitude of different attack patterns, all of which you must memorize through trial and error if you are to survive. The penultimate boss of the game in particular enjoys a vast set of attacks that encourages unorthodox strategies to avoid, and I consider it to be the best boss fight I’ve played in years.

Otherwise, the game is traditional Metroid exploration. You traverse open maps, hit dead ends, and make note of them to return later when you have acquired new abilities to enable deeper progress. Samus Returns does not direct you to your next target with the annoying specificity of Fusion, though the map design is straightforward enough that you won’t be left wondering where to go in most cases anyway. The lack of mystery is either a plus or a minus, depending on your perspective, but I personally didn’t love it.

The Planet of Familiarity 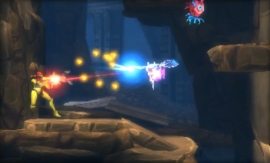 The color palette isn’t bad, but otherwise, the visuals really aren’t a selling point. They seldom ever are on 3DS.

The core gameplay of Samus Returns is excellent, but its exterior is nothing to write home about. The graphics are passable at best, not wildly detailed and not expressing any particular artistry. The 3D effect too of Nintendo 3DS is mostly relegated to the backgrounds, which are nice if you consciously stop and stare at them–but why would you when you’re constantly fighting for your life?

The soundtrack is similarly perfunctory. Several of the tracks are remixes of songs from Super Metroid, which handicaps the game’s ability to carve out its own identity for its world. (Although, I think Super Metroid has the most atmospheric soundtrack of any game ever, but that’s besides the point.)

The final result is a bit queer: The visuals and audio do nothing to distinguish Metroid: Samus Returns as its own unique entity, yet the actual gameplay does everything to distinguish itself from previous 2D titles in the series. It even dares to bring Other M-style tenacity into its combat. It is very rare for a video game to be able to define itself based exclusively on the strength of its gameplay mechanisms, but Samus Returns has done it.