Posted on September 24, 2017 by John Friscia Leave a comment

In a nutshell: Super Power, Spoony Bards, and Silverware: The Super Nintendo Entertainment System, by Dominic Arsenault and published by the MIT Press, examines the marketing, technology, and culture fostered by Nintendo between the ’80s and mid ’90s. The book argues that Nintendo’s practices during this era established short-term dominance over the video game industry, but these same practices were also precisely what caused Nintendo to ultimately lose its market share first to Sega and then more so to Sony over the long term. I find that this book is extremely compelling and is a must-read for those interested in the subject matter.

“Never relinquish control” is, according to this book, at the heart of everything Nintendo did in this era. (It may still hold true now.)

The Super Nintendo is remembered in video game history as the one of the greatest–if not the very greatest–home game consoles of all time. Nostalgia, in addition to retrospective assumptions based in hindsight rather than the reality of the time, has colored conversations about Nintendo’s place in that era of gaming ever since. But in his new book, Dominic Arsenault, Associate Professor in the Department of Art History and Film Studies at the Université de Montréal, makes a formidable case for how every layer of Nintendo’s corporate policies during and before the 16-bit era were directly responsible for the company’s “fall from grace” in subsequent times.

As the book jacket promises, “This is a book about the Super Nintendo Entertainment System that is not celebratory or self-congratulatory.” Indeed, Arsenault examines the Super Nintendo and Super Famicom (of which he makes a distinction) with academic neutrality, presenting the cold facts and trying to offer enough context so that the data will not be misconstrued. So if you are hoping for Super Power, Spoony Bards, and Silverware: The Super Nintendo Entertainment System to be rife with anecdotes and horror stories about working with or for Nintendo, then you will be disappointed. This book features very little of that, because (1) Arsenault is more interested in how Nintendo operated at its highest strategic levels, and (2) few interviews exist about what exactly it is like to work inside the “walled garden” that is Nintendo. Arsenault instead informs this book by way of massive bibliography, including academic research, business literature, and notably hundreds of video game magazines of the era.

He ultimately breaks his examination of Nintendo down into three core components: marketing (Nintendo’s “super power”), culture (cultivating a generation of “spoony bards”), and technology (the “silverware” that is the Super Nintendo’s hardware architecture). In each area, Nintendo made choices that established short-term dominance at the cost of long-term viability.

Although the book is only 7 chapters and 195 pages, I was forced to pace myself while reading it–not because it was dull, but rather because it was so extremely informative. I was afraid that if I did not pause that all of the fantastic information I had learned would spill right out of my head if I continued reading even more enrapturing information. For instance, I learned that, when Nintendo first announced Super Nintendo to the public, the Super Nintendo did not exist in any form–not even conceptually. The announcement was merely a panicked bluff and a direct response to NEC and Hudson Soft announcing the PC Engine. Up until then, Nintendo had just intended to keep riding the wave of success brought by the NES!

But interesting factoids aside, the individual arguments that Arsenault carefully crafts toward his identified trident of marketing, culture, and technology are all powerful. With regard to marketing, he finds (and to clarify–I’m strongly simplifying his arguments) that Nintendo of America shot itself in the foot by positioning itself so strongly as a family-friendly but specifically boy-centric business. The problem with this marketing was that the little boys who loved the NES subsequently grew up and felt like they had “aged out” of Nintendo’s products; thus, those newly minted teenagers graduated to the cool, edgy Sega Genesis instead. Even more problematically, Arsenault documents how video games were not thought of as “kids’ stuff” in America prior to the arrival of Nintendo and the NES, in that even Atari had geared its advertising toward adults over children. When Nintendo chose (and succeeded) to position the NES as a machine for boys, it simultaneously created the “video games are kids’ stuff” myth. This misconception actually went on to stifle efforts at mainstream artistic acceptance for video games as a whole. Strike one against Nintendo! 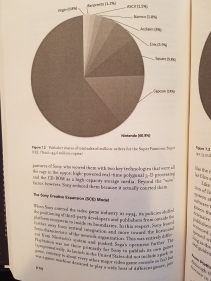 This is a breakdown of sales on the SNES by publisher, but looking specifically at games that sold 1 million+ units.

Of course, for me to try and summarize all of the book’s wide-reaching points here would be both silly and not at all in line with the purpose of a book review, but I want to at least offer a taste of this book’s uniquely ambitious scope. So I would like to give one more example of the book’s insights: the concept of Nintendo as a “self-party” platform. Arsenault argues that, because Nintendo derived so much of its profit from the sales of its own software, Nintendo saw third-party developers for its own consoles as competition. Nintendo didn’t actually want third-parties to do exceedingly well on the NES or SNES, or at least Nintendo didn’t want them to do exceedingly well exceedingly often. As a result, Nintendo developed all manner of draconian policies of what developers could publish on their platforms and how often, and they also took every opportunity to leech licensing and manufacturing fees for every title published. In this way, Nintendo maximized profits and control, and third-party developers did what they were supposed to do: help Nintendo maintain its market share.

Needless to say, this model of command and control fragmented in the wake of Sega’s more lenient and inviting policies with the Genesis, and the model broke completely when presented with Sony’s model of developer freedom and empowerment. It would not be until the “Wiivival” that Nintendo rose to power again.

I confess that I don’t make a regular habit of reading books about video game history, hardware, or design. I certainly own a few here and there, but I cannot say with absolute certainty that Super Power does not retread ground covered in other recent works. What I can say is that Arsenault sources all of his data and ideas extremely well, and it seems to me that he has synthesized available data about Nintendo on a grand scale that has never been done before. He paints a complete picture of what Nintendo was in the 16-bit era, of its successes and its failures. And importantly, the conclusion of his book is not cynical; in spite of how self-serving Nintendo’s business practices were, Arsenault concedes that these practices were incidentally responsible for the creation of one of the strongest video game libraries that we have ever seen. One might even argue that Nintendo failed in the best possible way.

You shouldn’t judge a book by its cover, especially Super Power, Spoony Bards, and Silverware: The Super Nintendo Entertainment System. It has a hideous book jacket that only pertains to its subject matter in the vaguest possible way. And even worse, the title of the book itself is a bundle of unmemorable, esoteric nonsense that practically begs to be ignored by search engines. If not for a stray Google Alert I received in my quest to buy a SNES Classic, I never would have known this book exists. That is why I felt the need to review it–to give it some badly needed (and deserved!) attention.