When it was first announced that Nintendo and Atlus were collaborating to create a game that crosses Fire Emblem with Shin Megami Tensei, absolutely no one in the universe was expecting Tokyo Mirage Sessions ♯FE to be the final result. It takes the standard Persona formula of high schoolers dungeon-crawling, but it throws out the series’s dark tone in favor of an overtly energetic and colorful J-pop backdrop. You play as teenagers who need to balance their obligation of protecting modern-day Tokyo with maintaining their careers as budding idols. As Polygon’s Janine Hawkins points out, the whole game ends up feeling like a Sailor Moon spinoff. Well, as a lover of both JRPGs and Sailor Moon, suffice to say I was pleasantly surprised. 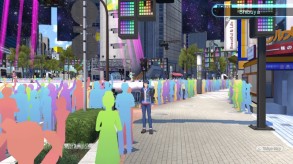 Here’s Shibuya, stylized with colorful bystanders who simultaneously complement the cheery tone and yet isolate your characters from the masses. (Sorry for low-quality Wii U screenshots.)

Tokyo Mirage Sessions is about as Japanese as a game can get. Everything revolves around Japanese culture, from the beautifully rendered real settings of Shibuya and Harajuku to the fictional in-game televised dramas and tokusatsu shows. It even retains the Japanese voice acting and makes extensive use of a LINE-like instant messaging app on the Wii U GamePad. The fact that the game makes sense at all is a terrific testament to Atlus’s localization abilities.

All of the main characters work for the same idol agency, which in Japan is a business that molds and trains young people to simultaneously become singers, actors, and models. The difference is that your particular agency is aware of a secret parallel world called the Idolasphere, where specters known as Mirages can steal humans’ enthusiasm and creative energy in order to become powerful. Your party members bind individually with some good Mirages (all of whom are inspired by Fire Emblem characters) in order to fight back, and they literally vanquish evil with the magical power of singing and acting. I smiled and laughed as I finished typing that last sentence.

The game takes a very relaxed, unrealistically rosy approach to the social issues it raises with its plot threads. Being constantly in the public eye should put great stress on these kids, after all. Yet much like in an episode of Sailor Moon, any problem can be happily resolved in 30 minutes or less, usually thanks to the power of friendship. The “We can accomplish anything we put our minds to!” attitude becomes increasingly prevalent as the story continues, and the ending of the game is so preposterously happy that it comes across excessive even by anime standards. The saving grace is that the game is utterly self-aware of how goofy it is, and its explicit purpose seems to be to induce goofy smiles and laughter. The numerous anime sequences and upbeat J-pop songs just seal the deal. 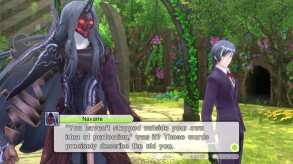 One of the rare scenes that had a legitimately insightful point to make! I wish I had a demonic swordsman with whom to discuss my problems.

There are some noticeable misses in the presentation though. For instance, the main character Itsuki can speak, which is a great change of pace from the usual silent Atlus protagonists. However, the game treats him like an infallible messiah, and everyone in the game is so fast to credit his wisdom and encouragement as the reason for their success. It just does not ring true–basic “Don’t give up!” and “You can be who you want to be!” pep talks are the vast extent of what Itsuki ever says. He is generally not much more developed than a silent protagonist, not even ever debuting as a real singer or actor like his colleagues. He is just there, inexplicably solving everybody’s problems, albeit with a charming naivete when he is able to compliment women’s beauty without it being flirtatious. And on that note, yes, every female ends up developing a crush on him, young and old. Furthermore, almost every female in the game has an enormous bust, complete with jiggle physics. It actually becomes distracting sometimes. This too is a big case of Japan being Japan.

The World’s a Stage

Dungeons in the Idolasphere tend to be sprawling mazes, full of basic puzzles that may not stump you but will definitely befuddle you. The map display on the Wii U GamePad will become your best friend, especially because it will tell you exactly where to go in order to complete various subplots. Each dungeon has its own aesthetic that fits the plot–a photography level, a TV studio level, etc., but none of them feel very lively. They are dream-like abstractions (which, to be fair, is what the Idolasphere is), though they receive some comical enrichment from rare Mirage NPCs.

The real meat lies in the turn-based combat, initiated by touching enemy Mirages in dungeons. On the surface, it plays out much like Shin Megami Tensei, with many of the skills retaining their names from those games. The rock-paper-scissors mechanics of Fire Emblem are also present in characters and enemies’ weaknesses to weapon types like swords and bows. The J-pop/idol mechanic however elevates the experience into something fresh and fun. Exploiting an enemy’s weakness creates a chain of attacks called a Session among party members where no EP (points used for skills) is spent after the first attack. This even extends to characters not in the immediate party, resulting in regular 7-hit attacks later in the game. Additionally, characters have randomly activated Ad-libs, powerful special attacks that force Sessions to start. There are also Special Performances, equally powerful attacks that are activated by spending meter from an “SP” gauge and again force Sessions. And on top of all of that, there are also collaborations, special abilities randomly activated during Sessions that produce myriad positive effects. 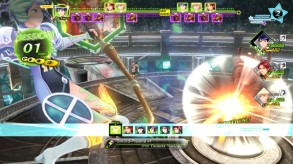 Frenetic jumping and arrows and explosions are just par for the course in the game.

It sounds complicated, but once it all clicks, it becomes highly intuitive. Battles maintain a fast, flashy, and fun pace. And more importantly, the combat maintains a good challenge for most of its running time, only curbed by a save-anywhere feature. Boss fights pose a great puzzle all by themselves, and they really reward all of your party building. Speaking of which, I almost never had to grind in order to keep up; subplots and sidequests keep you in tip-top shape. Indeed, completing optional character subplots (usually to help them overcome a singing or acting challenge) causes characters to literally embody new powers as they develop a better understanding of their identities. It is truly bizarre and awesome that the whole game coalesces so comfortably around the idol culture theme.

An RPG to Idolize

Tokyo Mirage Sessions is a traditional role-playing game done right. It takes the familiar foundation of existing Atlus RPGs and paints something fun and new over top of it, with an extremely strong aesthetic prevailing at every step of its execution. Anyone with an interest in Asian idol culture in general will probably find a lot to love here, and anyone who just enjoys bright colors and happy stories (or challenging gameplay) will be at home here too. Although the game will probably challenge your suspension of disbelief more often than it challenges your intellectual beliefs, it is a worthy change of pace. I would highly recommend this game as a “starter RPG” for someone new to the genre, especially children. Tokyo Mirage Sessions celebrates an idealized version of an industry that is fittingly all about posturing, and the results are largely parallel: It is super, stupid fun.

All images on this website are my property or were legally obtained through stock image services, except in cases where images are being used for editorial purposes.
%d bloggers like this: