While I love and mildly worship the Lunar series, I did not have as fond a time with the original Grandia when I finally played it through the PlayStation Store. Unlike many, I found its story and characters to be generic at best or boring at worst, its battle system to be far too easy to exploit to remove all challenge, and even its music to be surprisingly unpleasant. Grandia II, which I did play briefly on the Dreamcast when it released, fares a lot better in my estimation. It jovially embraces practically every cliche of the JRPG genre–much like its predecessor and Lunar–but it stands out on the great depth of its battle system. This review will be covering the anniversary edition port on the PC. 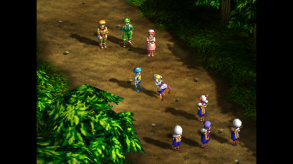 Elena shares some kind words with people who have never found a color they won’t wear.

The world of Grandia II features a church highly reminiscent of the Catholic Church, complete with a pope, and it worships the god of light, Granas. According to scripture, Granas in ancient times battled the god of darkness, Valmar, and Granas’s victory over Valmar left the world scarred. Both gods seemingly vanished afterward, but the church has warned of a “Day of Darkness” ever since, when Valmar will return to the world. In a modern-day ceremony to prevent the Day of Darkness, a timid church songstress named Elena accidentally absorbs the literal wings of Valmar into her body, and she becomes possessed by the loudmouth sexpot maybe-demon Millenia. The two of them subsequently share use of the same body, one taking control at a time, and comedic hijinks ensue as Millenia falls in love with the protagonist in spite of being on a mission to absorb all the other parts of Valmar into her body.

The protagonist in question is Ryudo, a “Geohound” who will complete any job for adequate pay. Unlike your standard good guy hero, Ryudo is openly hostile of the church, obnoxiously mocking Elena and other church members at every opportunity. Ryudo gets hired to escort Elena to meet the pope so that she might be purified of Millenia’s presence, and true to JRPG form, every town they reach along the way has a crisis only Ryudo and friends can resolve. The twist is that Ryudo spends the first few hours of the game being absolutely indifferent to other people’s problems; it is constantly Elena or Roan (a boy who joins you in your travels) who must plead for Ryudo’s help, but you get hints that Ryudo has a good heart deep down.

Beyond this, the story practically writes itself. Every cliche you expect to see happens: Ryudo has a shadowy past with a missing brother. Ryudo gets in a love triangle with Elena and Millenia. Ryudo realizes that bonds between people are important and takes an active role in defending the world from Valmar. Roan is more important than he appears. The church is hiding things from the public. A beast man party member named Mareg speaks and lives like a stereotypical American Indian, and he teaches how to live in harmony with light and darkness. Even whether or not humanity really needs a god to guide it is questioned. Outside of one surprising death, and actually a whole lot of death and despair toward the game’s conclusion, nothing really stands out. The good news is that there are a lot of little things in the game’s design that elevate this generic world into something more impressive.

FMVs are spectacularly grainy, but the visual ambition on display is admirable.

If you want to know what it is like to live in any of the various towns in Grandia II, you will not have to wonder. The vast majority of NPCs in the game will have original dialogue at least the first three times you talk to them, and each time, one of your party members will have a response. It is almost never a static text exchange from an NPC to your party; your party always responds and asks questions. In this way, you learn much more about the game world, in addition to learning more about your party members according to the perspectives they share on various topics. Communication in general seems to be at the heart of the game, as there are many occasions at inns and while camping that the party just gets to interact with each other about current events. If you have the patience for it, there is an incredible amount of dialogue in this game, and I applaud the localization team for succeeding at making it generally entertaining to read.

Each town has distinct architecture too, such as one in a forest where whole houses are carved out of single trees. It is hard to call any single location in the game “original,” but the development team sure put their all into making every archetypal location shine. Dreamcast horsepower only goes so far though. The graphics, which I presume have been cleaned up ever so slightly for the anniversary edition, still cannot compete whatsoever with Final Fantasy X, a game released only one year later. Clipping is also a regular problem that undermines the action of certain story scenes. And perhaps unique to the anniversary edition, (I cannot confirm this.) I experienced a few key story scenes where written dialogue fell completely out of sync with voice-acted dialogue, ruining the drama and making me wait for the text to catch up with the talking. Suffice to say, Grandia II Anniversary Edition is not a technical marvel.

Moving on though, the game’s dungeons continue the theme of being highly functional but otherwise unremarkable. You move the occasional block, push the conveniently located boulder, or press the switch that rearranges a room. Outside of this limited interactivity, you are mostly exploring linear dungeons (or sometimes an honest-to-goodness maze) with treasures littered at the dead ends. There are some neat gimmicks here and there though, such as when the veins of a giant monster get turned into a dungeon corridor to traverse. Save points with free recovery are abundant too, so exploration rarely feels stressful. This is good and bad, depending on how you choose to look at it. And lastly, composer Noriyuki Iwadare‘s soundtrack is largely a delight, serving up multiple tracks with which I enjoyed humming along. It fits in line with the Lunar games and is I feel a marked improvement over his work in the first Grandia.

Destroy the Planet with Every Attack

No amount of displaced Bigfoots will impede your holy march.

The big claim to fame for the Grandia games is their battle system, where all party member and enemy turns are tracked on a gauge. If someone is attacked at the right time with the right ability, that character’s turn can be canceled completely. In theory, the system is pretty innovative. In practice, standard battles are easy enough (especially with the aforementioned wealth of save points) that you will just want to mash your way to victory with regular attacks. Canceling actions becomes a big and respectable aspect of boss battles though, which is where the game best shines. Bosses are usually multi-target affairs, with many abilities and status ailments to inflict. Winning these fights is always satisfying, but seldom a challenge if you know what you are doing.

Grandia II offers an impressively wide range of options for character customization. Each character has his or her own unique skills that can be leveled up, but then there are equippable “Mana Eggs” that contain all of the magic in the game. Each individual spell on an egg can be leveled up, and you can change who carries each egg whenever you want. And on top of that, there are also books with additional, individually equippable skills that can be leveled up too. You are given total freedom to develop your party, so if you want to build evenly across all available means, you can. But it actually makes the most sense to put all your eggs in one basket (figuratively speaking), max out your most powerful available skills, and just demolish enemies and bosses alike with overwhelming force.

Basically, the sum result of all this creative customization is that you have too much power and not a great enough threat to warrant it. Compared to a brutal game like Shin Megami Tensei IV or even Dragon Warrior VII, Grandia II is a relaxing Sunday drive, never taxing the limits of your abilities. It is joyful escapism, allowing you to build a team of mighty warriors who can dominate in any situation. This point is really driven home with the game’s unskippable magic and skill animations, which at times employ 10+ second FMVs of stars exploding or energy beams pulverizing the planet. The real miracle of the game is that anybody survives your party’s exploits at all.

It is important to note though that the anniversary edition of Grandia II comes with a Hard Mode, so if you really want to be tested, the option exists. I was fine with my Sunday drive, thank you very much.

Final Fantasy X on a Budget

Grandia II and the previously mentioned Final Fantasy X actually do have a few similarities. You play a protagonist who must protect a woman with a great religious duty. The religion in question harbors secrets about its god and devil. The battle system offers wide customization and emphasizes the importance of the order of player turns. The story is unusually linear. The main difference between the two is that Grandia II is a parade of JRPG tropes wrapped in an anime packaging, while Final Fantasy X is a roller coaster of disparate design ideas thrown at a wall on a high-budget. Final Fantasy X is almost unarguably the better game, because it has the production values to aspire to more. But Grandia II takes its more traditional scope and does the best it can with it, from the rich character dialogue to the fantastical battle effects. I heartily recommend this game to JRPG purists such as myself and will grade it with this bias in mind. For everyone else looking to play a classic Japanese role-playing game, you probably just want to pick up an old Final Fantasy, or, even better yet, a Lunar!