Posted on November 15, 2016 by John Friscia Leave a comment

For better or worse, Shin Megami Tensei IV: Apocalypse looks and plays like expensive DLC for Shin Megami Tensei IV. It takes all the same locations from the first title and remixes it with a mostly new story, along with some new monsters and abilities. In theory, people who loved the original and want to play something else exactly like it have every reason to be thrilled. Heck, I myself have quietly regarded Shin Megami Tensei IV as my favorite game for Nintendo 3DS. But after playing Apocalypse–and in spite of it being a quality title in its own right–I can’t help but wonder if Atlus would have been better served to just dedicate its resources to making Shin Megami Tensei V.

Kill the Gods, ALL of Them 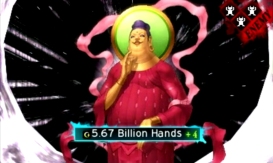 In an intriguing change of pace, the story of Apocalypse begins directly in the middle of the events of the original IV title. But instead of working around the events of IV, this new game introduces a new set of villains on top of the existing ones, retconning all of IV‘s potential endings in the process. Basically, what happens is a bunch of gods from various non-Abrahamic religions get released into the world at the same time that God’s angels and Lucifer’s demons are already at war, culminating in an even bigger war between every divine being fit for a Wikipedia article. One thing leads to another, and your objective as the player becomes to kill every god in existence.

On paper, this sounds completely awesome. And it’s even wilder that the silent protagonist (Nanashi) starts the game by getting murdered and subsequently revived by a miscellaneous B-string god (Dagda) to do his bidding. The problem however is that the game never takes full advantage of its fantastic, unusual premise. In fact, the execution of the narrative surprisingly feels much more “by the numbers” than it ever did in IV.

For instance, IV had a pretty oppressive atmosphere: The lone samurai Flynn struggles to walk the middle path between order and chaos, while being forced to fight his own friends as everyone starts to pick sides. You can actually feel how much Flynn must sacrifice in order to follow his moral compass. By comparison, Apocalypse follows a much more traditional narrative model: Nanashi fights to save humanity from gods and demons, while amassing a group of allies who look to him for leadership and make him stronger. These comrades are the standard mix of upbeat and/or obnoxious JRPG personalities, even providing unexpected comic relief. As a result of this newfound jolliness, the narrative in Apocalypse ends up actually feeling breezier and less dire than in IV, in spite of all the deaths that occur.

Ostensibly, this new game does break from series tradition by emphasizing “neutral” endings that are not so law- or chaos-oriented, but in practice, one ending is very happy while the other is ominous and even threatening. The first feels like the “real” ending while the other just feels like an exciting “what-if” ending. So ultimately, by trying to do something different, Apocalypse accidentally only succeeds in being a lot more like standard RPGs than IV. And it really is a shame, because if these new villains were not so two-dimensional and offered some legitimate moral dilemmas, it could have been an incredible narrative to behold.

As the Dome Turns 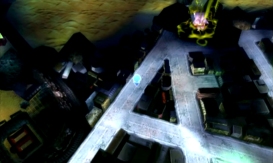 Tokyo isn’t much to look at, but, well, why should it be at this point?

Almost every location in Apocalypse is recycled from IV, albeit with some pleasant new music tracks accompanying them. Tokyo is still sealed inside a giant magical dome in which humans compete with demons for survival. And yes, Tokyo is still a little difficult to navigate, but the labeled touch screen map and mission objectives help guide the way. A large selection of warp points mitigates any hassle from getting from one side of the city to the other too. This in turn means that pinpointing where to do sidequests is seldom a chore either. All in all, travel maintains a brisk pace.

Unfortunately, the two big dungeons at the end of the game that actually are new feature some of the most boring level design in recent memory, even by JRPG standards. The first dungeon, while very large, at least offers several new monsters to fight and fuse. However, the second dungeon is monotonous and enormous, requiring literally hours to traverse (and that’s while avoiding most battles!), and its monsters seemingly cannot be collected. Even worse, my Nanashi was already level 99 before this point as a result of the game being excessively long in the first place, so I really don’t know what the development team was thinking here. Instead of a high note, the game ends on an agonizingly prolonged note, like someone trying to strangle a goose.

The easiest way to describe combat in Shin Megami Tensei is that it is Pokémon with demons (though the former predates the latter by four years). You as the protagonist can bargain with encountered monsters instead of fighting them, gaining money or items from them or persuading monsters to join your team. Monsters can then be fused with other monsters, resulting in brand new monsters with their own affinities but who retain the skills of the old monsters. And as a bonus, Nanashi can learn their skills too. Suffice to say, monster fusion swiftly becomes addicting, and I personally reveled in making my team more and more powerful. (Your combat team always comprises Nanashi and his demons. The other aforementioned allies only function in a support capacity in battle, and only one partner may be active at a time.)

In IV and Apocalypse both, exploiting enemy weaknesses grants extra turns, while using an attack to which the enemy is immune results in losing turns. Landing critical hits or missing attacks altogether trigger the same respective effects. These rules hold true for both your party and enemies, so the biggest element of strategy in the game lies in earning as many extra attacks as possible while minimizing enemy turns. It is a very tense but rewarding style of combat. 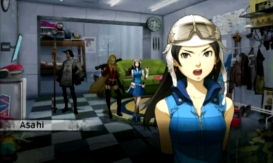 Your young, attractive friends will never leave your side!

Apocalypse differentiates its combat from that of IV in small ways that add up. For instance, monsters now have additional affinities that make skills of certain types stronger or weaker than is normal when they use them (such as a fire monster having stronger fire attacks and weaker ice attacks). And in general, more monsters and skills have been added to the game, which is great. Even better, the monsters have varied and imaginative appearances.

In general, Apocalypse just struck me as a much easier game than IV. This could just be in my imagination, and a mere result of having become battle-hardened from playing IV. Nonetheless, I feel like IV offered more “impossible” boss fights, the kind that seemed ludicrously difficult until that one perfect strategy became apparent. By comparison, I steamrolled through most of Apocalypse, only having legitimate trouble with the final boss fight, which arbitrarily adds whole new rules and combat factors found nowhere else. I personally felt disappointed that the game only seemed to get difficult when it broke its own rules. But again–maybe that’s all in my imagination.

Twilight of the Idols