Until Dawn is a horror movie that you get to play and control. It celebrates as many tropes of the horror genre as it can fit into the span of one story, for better and for worse, but without ever devolving into parody or soulless copycat. This is not a game catering exclusively to horror junkies though; I had been excited to get my hands on this game for a long time, in spite of not actually being a fan of horror myself. As it turns out, my excitement was warranted. Until Dawn ain’t perfect, but that didn’t stop me from loving it. 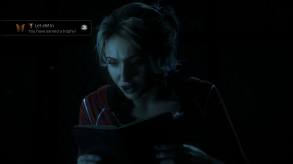 In the most frightening scene of the game, Hayden Panetierre’s character confronts her indomitable illiteracy.

The premise behind the story is pretty simple. One year ago, eight teenagers went partying at an isolated mountain lodge, owned by the family of three of the teenagers. While there, some of the teens played a prank that resulted in two of them running out into the woods, where they disappeared. Fast forward to the present–the six surviving youths (They might be age 20 now?), plus two new friends, decide to go back to the isolated mountain where the horrible tragedy occurred, so that they can party harder. Yep, this is horror movie logic.

You get carefully crafted introductions to each of the eight main characters, so that you very quickly get a feel for who you do and do not like. For instance, Mike (voiced and modeled by Brett Dalton, aka freaking Grant Ward from Agents of S.H.I.E.L.D.) is a categorical alpha male who eventually won me over just by virtue of being awesome at everything all of the time. Sam meanwhile, portrayed by Hayden Panetierre, is the generically pure heroine who is conveniently excellent at rock climbing. With the possible exception of Emily, who is stone-cold mean all the way to the end credits, you are likely to empathize with everyone and want to help them survive. This is good, because someone else is up in the mountains with them, and your decisions will determine how many of them are still alive by the time the sun rises.

Without ruining the story, I can say your decisions really do affect the flow of the plot in substantial ways at times. There are certain plot beats that must occur no matter what, but how you arrive at them and what results from them can differ in fun ways that make replaying the game exciting. It is also interesting to see how believably malleable the characters’ relationships with each other are over the course of just 10 hours. And on top of that, the story in general makes really clever use of misdirection, so that what you think you’re seeing is never quite the full picture. Perhaps if I were better versed in horror (or just less gullible) I would have seen the twists coming, but I was happy to be fooled and very pleased to see the developers had put so much thought into how they framed events.

Jessica is one of at least two or three characters in the game who should have died of extreme hypothermia.

Presentation and atmosphere are everything in a game like Until Dawn, and fortunately, both are basically top notch. The cast, many of whom I recognize from television (including Meaghan Martin, whom I loved in the critically underappreciated TV adaptation of 10 Things I Hate About You), deliver outstanding performances. The character models are gorgeously rendered too, to such an extent that it might as well be the actual actors in front of cameras. Of course, it is a little silly that they are supposed to be barely out of high school when every actor looks to be mid-twenties or older in age, but that’s another verisimilitude we’re used to seeing in movies.

Environments are pretty consistently dark and difficult to see in detail, but the lighting is again fantastically realistic. The music that accompanies it all is exactly what you would expect–unrelentingly foreboding, anxious, and extremely vicious in its use of string instruments. None of the music jumped out at me as memorable, but in a game like this, I think that’s a good thing. It serves its purpose in the background where it belongs.

The best part of the game is just watching how characters react to each other in different situations.

What constantly takes center stage in this game is the dialogue. Oh, boy, there are not enough paragraphs in the world to convey my full feelings on the dialogue. Until Dawn manages to strike an incredibly perfect middle ground between “so bad it’s good” dialogue and genuinely clever dialogue. Such a bizarre harmony might never occur again in our lifetimes. Basically, all the characters speak pretty believably most of the time, but then there are moments that just leave me in awe at their absurdity. For instance, at one point in the game, the message “DIE DIE DIE” is found scrawled on a wall, to which Emily snarkily responds, “Unfollow.” At another point, Mike is trying to start a fire so he can have some alone time with Jessica. He discovers matches, which prompts him to say, “Lookie lookie, who’s going to fire up some nookie.” I still become paralyzed with existential amazement every time I recall these events.

The Rules of Dying 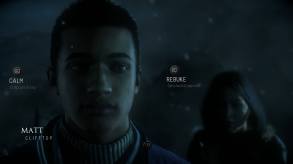 Those are the eyes of a man who is already dead inside, killed long ago by Emily’s nonstop nagging.

Mechanically, Until Dawn is basically identical to the Telltale Games The Walking Dead series, but with higher production values, higher stakes for quick time events, and a lot less of that “meaningful reflections on human nature” stuff. If The Walking Dead is high drama, then Until Dawn cheerily fulfills the role of popcorn muncher; indeed, I beat the game the first time in two lengthy, hopelessly addicted sittings. Until Dawn further differentiates itself by offering various collectible clues that enrich the story, but unlike many games that do this, the clues in Until Dawn actually make sense. You don’t need to keep a diary next to your controller in order to understand how things connect, which is a welcome relief.

There are a few things about the game that make it less than flawless though. Each character has his or her own set of stats pertaining to their personality and relationships with other individual characters, but the truth is that these stats very rarely matter. They should have been left behind the scenes, invisibly calculated, instead of presented to the player as inarguable metrics. Another bothersome thing is the speed of movement. Outside of cinematics, characters never move faster than a brisk walk. This is both realistic and frankly maybe even necessary, but that doesn’t make it any less dull. The walking speed especially starts to grate in a couple long stretches of the game where you are controlling one character in big areas.

And finally, yes, the story demands some suspension of disbelief on your part in order to work. That’s just the way horror goes. Additionally, although any and all of your eight characters can die, they will still be successfully making jumps and casually getting up from falls that will make you think they’re all the long lost children of Nathan Drake. Gravity is just a nonentity to these kids.

As far as I’m concerned, the objective score I’ve given this game is irrelevant, because I loved it just that much. Until Dawn is at least one of my favorite video games in recent memory, and it might become an all-time favorite. Full price might be too steep for some people to pay, since the game (including multiple replays) will only last for 15-20 hours. But when this game reaches a budget price, there truly is no excuse not to play it, unless you are an out-and-proud scaredy-cat. For everyone else, Until Dawn is the first game to really let you live in a horror world.